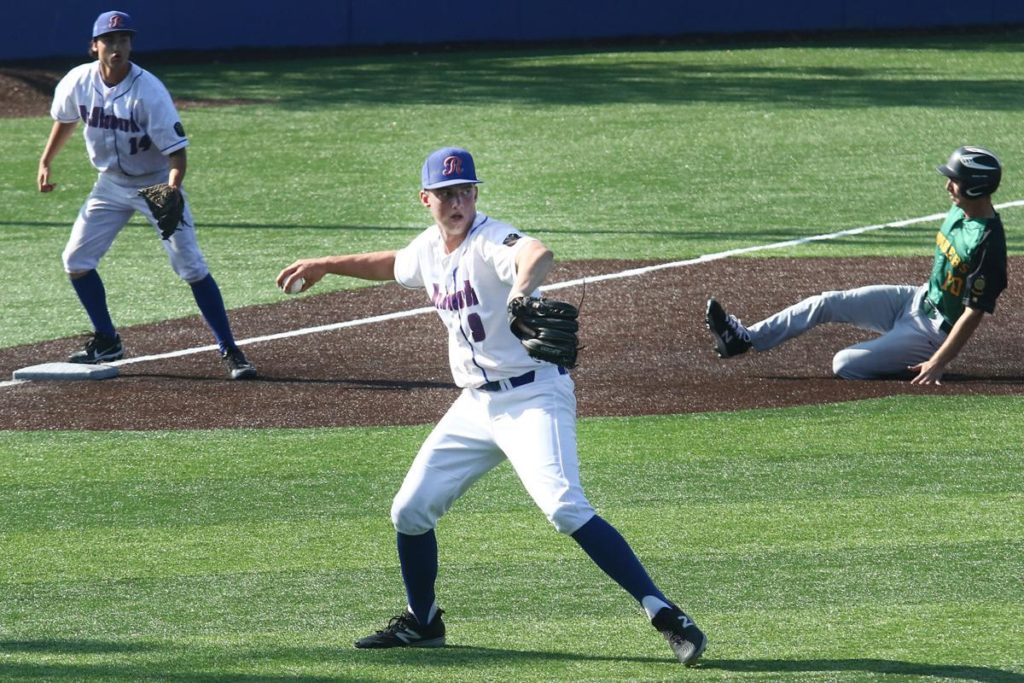 Roseburg Dr. Stewart’s didn’t just put Wednesday’s disappointing losses to the Springfield Timbers behind it and move on.

No, the Docs erased any memories of those games and got some revenge by dominating the Timbers in an Area 4 twin bill at Bill Gray Legion Stadium at Champion Car Wash Field on Thursday.

“(Wednesday) we were just out of it. We didn’t come prepared. We didn’t come focused. In every way it was just a really bad day,” Docs pitcher Jace Stoffal said. “But obviously today we turned it around and we had the compete piece down, the focus piece down and were honestly just electric all day.”

The Docs completed a home sweep of the Timbers, 2-0 and 7-2, thanks to a pair of complete game victories from Stoffal and Evan Corbin.

Roseburg (22-11, 5-3 Area 4) defeated Springfield in Game 1 behind a 15-strikeout performance by Stoffal. The Docs then took the nightcap with Corbin earning his team-best fifth win of the season.

Stoffal, a Roseburg High School graduate who played at Umpqua Community College last season, improved his record to 4-0 on the year in his sixth start. He allowed just four hits, while walking three and striking out a season-high 15 batters. Stoffal also lowered his ERA to 0.70.

Corban had a one-hit shutout going through the first five innings, but finished with two runs allowed on five hits with three walks and five strikeouts.

The pitching dominance “sets a tone for the whole team,” Corban said.”It’s like if we set the tone with one guy, the whole team will follow.”

The team did appear to feed off of the stellar pitching. The Docs committed just two errors in the two games combined and they notched 14 hits total, including five Roseburg batters recording two hits in the nightcap.

Austin Takahashi continued to hit well, stretching his hit streak to four games with a single in both contests. Spencer Six was 3-for-5 between the two games with a double, RBI and walk.

Roseburg took a 1-0 lead in the second inning of the opener. Three errors in the inning proved costly for Springfield (15-11, 4-4). The Docs added an insurance run in the third on a sacrifice fly by Six.

Dr. Stewart’s jumped out to a 3-0 lead in the first inning of the second game. Dominic Tatone and Sebastian Watson each contributed two-out RBI singles.

The Docs drove in another run with three straight two-out singles in the second inning. Roseburg added a run in the fifth on a wild pitch and polished off the scoring with a pair of runs in the sixth.

Leo Reeves had the only RBI of the day for the Timbers, a two-out single in the seventh inning of Game 2. Reeves was also 3-for-3 in the first game.

With the wins, the Docs moved into third place in the Area 4 standings with eight league games left to go.

“I feel like we’re pretty prepared (for the stretch run),” Stoffal said. “If we take these two games and do that every single game — pitching, defense and hitting-wise — we’re going to be in a very good spot.”

Up next, Roseburg will host the Petaluma, California, Leghorns on Friday for a nonleague contest at Champion Car Wash Field. The nine-inning game gets under way at 6 p.m.

Rumors are swirling today about Damian Lillard wanting out of Portland. How much longer does he stay? #RipCity