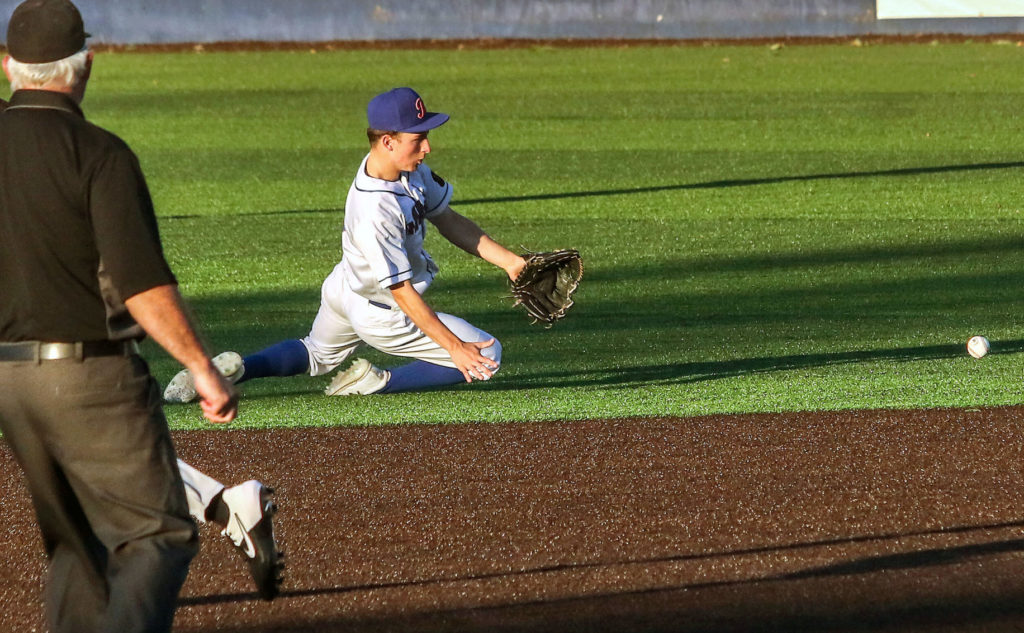 In a seesaw battle, the tipping point came in the fifth inning when Northwest Diamond Sports put up a five-spot against the Roseburg Dr. Stewart’s on the way to a 9-7 victory at Bill Gray Legion Stadium at Champion Car Wash Field Thursday night.

Northwest Diamond Sports, made up of players from Portland suburb schools, broke a 4-4 with four hits in the fifth inning against Docs reliever Jordan White. Bowen Stinson drove in a run with a one-out triple, Spencer Barnard and Brendan Couture followed with RBI singles and a two-run triple by Carson Bush capped the scoring.

Dr. Stewart’s got three runs back in the home-half of the fifth on a double by Dawson Gillespie and a triple by Jace Stoffal, but the game-tying run was left on base as the Docs finished the fram with the bases loaded.

The contest started with both sides trading runs. The Docs (3-3) took a 1-0 lead in the first on a throwing error. Northwest Diamond Sports tied the game in the second on a fielding error.

A sacrifice fly in the third by Gillespie gave the Docs a 2-1 lead, but NWDS (3-1) built a 4-2 advantage in the fourth thanks to four walks and a hit batter by Docs pitcher Mason Delcollo.

“We just can’t do that,” said Docs coach Jeremiah Robbins of the numerous free passes given up by his pitchers. “That was what got us tonight.”

“Our last three games, we got away with some hitters chasing some bad pitches that bailed us out a little bit and these guys didn’t,” said Robbins. “They drew some walks and that put our backs against the wall and we didn’t have an answer.”

Gillespie and Stoffal each went 2-for-3 to lead the Docs’ offense. Stinson and Barned each had two hits to lead Northwest Diamond Sports.

The Docs will try to regroup as they are scheduled to play the late game on Friday in the Father’s Day Tournament at Champion Car Wash Field. Roseburg will face Laces Baseball, a team from Washington.

“I’m looking forward to our game (Friday night) to see how they respond to this and that’s going to be the big question mark,” said Robbins.

Northwest Diamond Sports will play against the Post 6 Barbers, also from the Portland area, at 5 p.m. Both teams are 1-0 in the tournament.