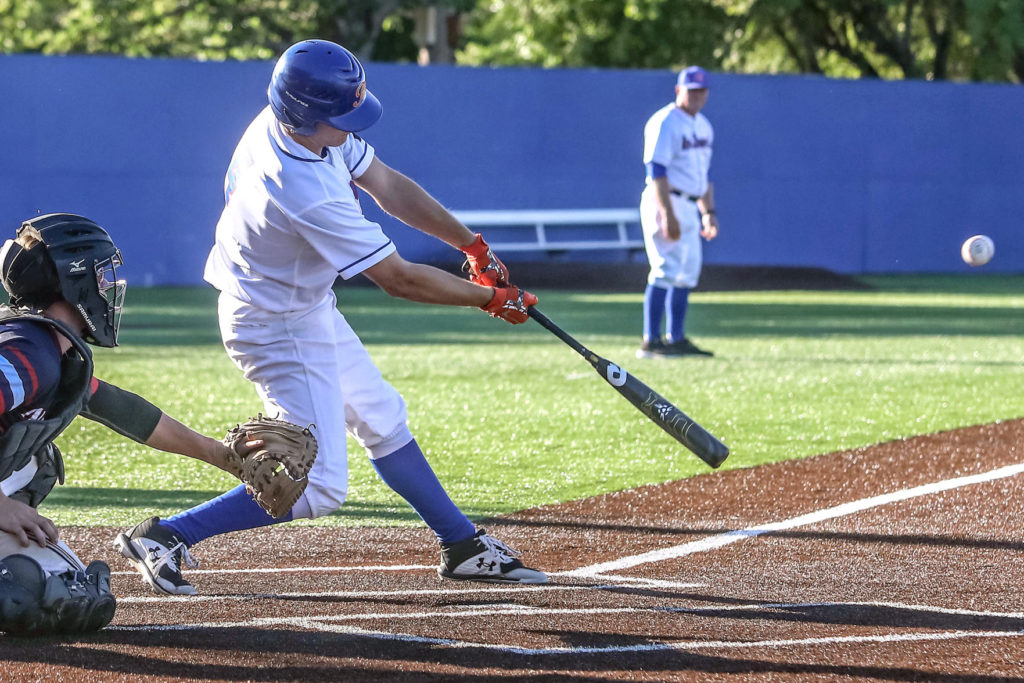 The Roseburg Dr. Stewart’s provided plenty of run support and Jace Stoffal was dominant on the mound as the Docs shutout the Grants Pass Nuggets 10-0 in six innings to begin play in the Father’s Day Tournament Wednesday at Bill Gray Legion Stadium at Champion Car Wash Field.

“Obviously, run support is huge and being a pitcher and getting even just that one run is a confidence boost,” said Stoffal after allowing just two hits, while striking out eight in the complete game victory.

“We just kept pouring it on them and didn’t let them breathe and it’s just really easy to pitch like that.”

Stoffal didn’t allow a hit to the Nuggets until the fifth inning and only faced three batters over the minimum. The win was his first of the season.

The Docs’ offense piled up 11 hits in support of Stoffal. Leading the way was Logan Klopfenstein, who went 3-for-3 with three RBI.

Klopfenstein got the scoring started with a two-out base hit in the second inning that plated two runs for the Docs. Roseburg (3-2) tacked on a run in the third on a passed ball and Klopfenstein drove in another run in the fourth to put the Docs up 4-0.

Dr. Stewart’s strung together four two-out singles in the fifth inning to add four more runs and a RBI single by Evan Corbin in the sixth brought home the final run that gave Roseburg a 10-run rule victory.

“We’re usually right to the cages two hours before game time and that’s helping us,” said Klopfenstein, who raised his batting average to .400 after his perfect day at the plate. “We’re getting focused and locked in and that’s transferring to the field.”

Grants Pass (4-4) had both of its hits in the fifth inning, one of only two innings the Nuggets were able to get a runner aboard. Ethan Elzy broke up the no-hitter with a leadoff single.

The Docs will next face Northwest Diamond Sports out of the Portland area on Thursday. The game is scheduled to be the last contest of day two in the tournament and get underway at 7:15 p.m.

Grants Pass will next face Laces Baseball Academy out of Washington at 2:45 p.m. Thursday.