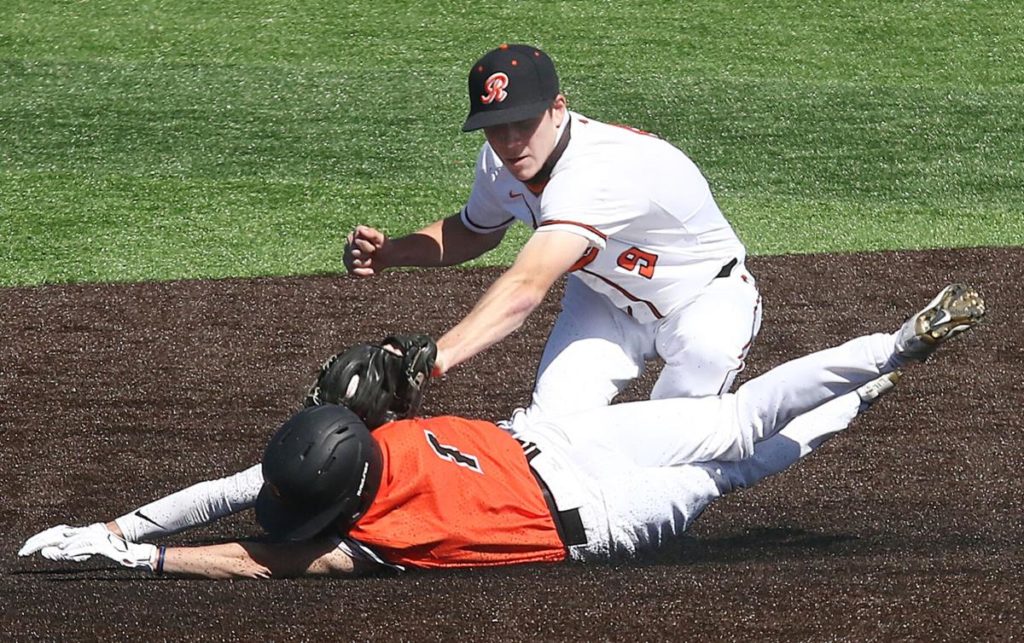 For the first time in 690 days, the Roseburg High School baseball team pulled on their jerseys, adjusted their ball caps, grabbed their gloves and took the field for a game.

The high school baseball season was back at Bill Gray Legion Stadium at Champion Car Wash Field on Tuesday when the Roseburg Indians hosted the Crater Comets for a season-opening doubleheader.

Roseburg (2-0) exploded for 12 runs in the first inning of the opener and needed just five innings for a 14-2 victory and completed the sweep with a comeback 7-3 victory in the nightcap.

Despite the victorious results, Roseburg head coach Troy Thompson says the long layoff has give the Indians plenty to focus on this season.

“Any experience we have right now is good experience because we haven’t seen it in so long,” said Thompson, who’s beginning his 19th season leading Roseburg baseball. “We had some guys that got some first varsity at bats and some inexperienced guys became a little more experienced today.”

Most of Roseburg’s 2021 roster is dressing down with the varsity team for the first time in their careers. Only seniors Garrett Zeimet and Troy Jones had any significant opportunities with the varsity in previous years.

The lack of a season in 2020 has thrust players that were just freshmen or sophomores in 2019 when Roseburg made a run to the state quarterfinals into the spotlight. Although inexperience isn’t a situation unique to just the Indians.

“Every program at every school. Everybody has had to battle through what we’ve kind of been dealt. So here we are, but the kids have done a great job of staying active and staying busy,” Thompson said.

Three sophomores showed up big in Roseburg’s sweep against Crater (0-2). Austin Takahashi led off Roseburg’s first at bats with a double to the left field fence and later scored the first run of the season.

Jordan White closed out game one by facing just three hitters and inducing a game-ending double play. He also made his first varsity start at third base in the nightcap and went 1-for-3 at the dish.

Evan Corbin shined on the rubber in Game 2, tossing 5 2/3 innings of relief after Takahashi exited with cramping issues. Corbin, who also got time starting at quarterback as a sophomore on the football team, earned his first win on the diamond by allowing just one run on six hits, while striking out six and walking none.

“It was definitely nerve-wracking, you know a little nervous, but I got settled in after the first or second inning. So, it felt good. Felt just like baseball,” Corbin said.

With so many players making their first appearances at the varsity level, Corbin wasn’t the only one feeling some jitters.

“I definitely say the first few innings were a little bit rusty,” said junior Dominic Tatone, who earned the victory in Game 1. “We did some things we wouldn’t do midseason, but that’s going to happen and we’re going to fix some stuff and clean things up and we’ll be good.”

The 2021 schedule will include Roseburg’s typical rivals to the south in Grants Pass and the two Medford schools. Additionally, former Southern Oregon Conference opponents Ashland, Eagle Point and Crater are on the docket.

Roseburg will continue its season on Saturday with a doubleheader at North Medford (0-1).

Games will once again be broadcast by sports radio station The Score 92.3 FM/1490 AM and video simulcasts will be streamed on 541radio.com.