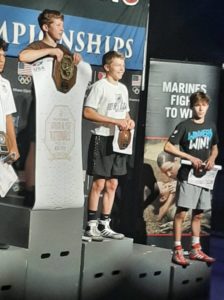 Gage Singleton (white shirt middle) stands on the podium after taking third at the 16U Freestyle Nationals in Fargo, ND. (PHOTO: Rudy Soliz/Facebook)

Singleton defeated Dedrick Navarro of Idaho 12-2 in the third place bout to land on the podium in the 100-pound bracket. He was 8-1 in the national tournament. A state champion with RHS, Singleton reached the round of 16 in the championship bracket before falling into the consolation rounds, where he reeled off six consecutive wins to place.

Gage’s older brother Nash Singleton, a rising-senior at Roseburg High School, started wrestling in the Junior Freestyle Nationals at 132-pounds on Sunday. He reached the round of 32 before losing his first match by a 12-8 decision. He won his first consolation match, but was knocked out of competition with a 10-0 loss to a wrestler from Texas.

With the freestyle competitions now complete, Gage and older brother Nash will begin competing in the Greco Roman nationals starting on Wednesday.

Rumors are swirling today about Damian Lillard wanting out of Portland. How much longer does he stay? #RipCity